BELGRADE April 19, 2022. The Mayor of Belgrade Zoran Radojicic and the President of the Assembly of the City of Belgrade Nikola Nikodijevic presented today the Award of the City of Belgrade “Despot Stefan Lazarevic” to the laureates in twenty areas for 2021. The award for the invention “System and procedure for deciphering and transposing the visual into a musical composition from an artistic image”, which contributes to technological advancement and especially benefits the blind, was given to Aleksandar Markovic, president of the Center for Applied Music and owner of Earth PR. 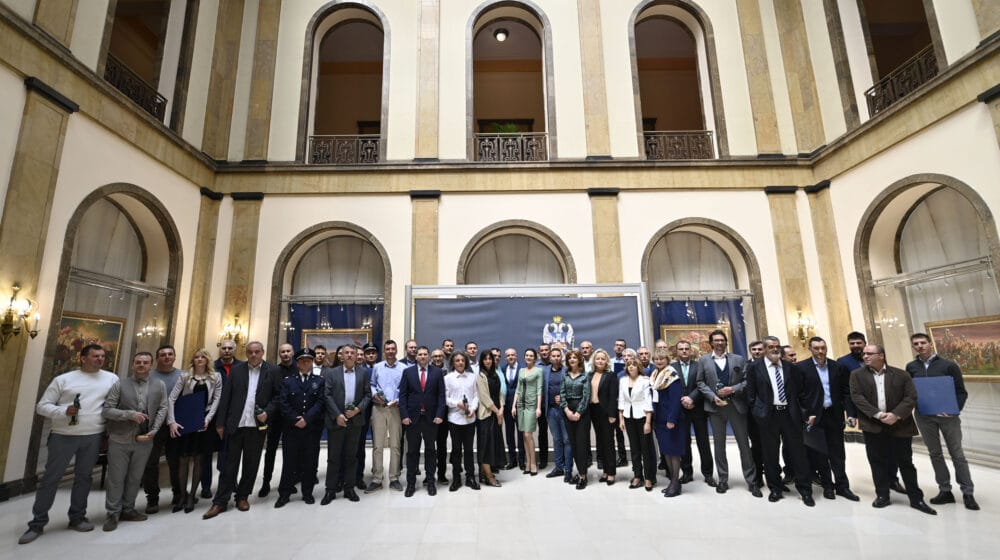 Traditionally, the award is given for the nineteenth time within the manifestation “Days of Belgrade”, which marks two important dates in our history – the first mention of the Slavic name of Belgrade in written documents on April 16, 878 and the day of handing over the keys of Belgrade to Prince Mihailo Obrenovic 19. April, 1867. Commission composed of prof. dr Dragan Povrenović, prof. dr Drago Cvijanović, dr Danica Mićanović and prof. Dr. Milica Gerasimović awarded the prize of the city of Belgrade for the field of science-invention for 2021 to Aleksandar Marković for the invention “System and procedure for deciphering and transposing the visual into a musical composition from an artistic painting”.
Aleksandar Markovic is an art historian, composer and communication expert, and the author of a large number of applied musical compositions. The invention has a high level of innovation and multidisciplinary applicability in the field of science and artistic creation. The invention was recognized and entered in the Register of Patents by the Intellectual Property Office on December 1, 2021. year, under number 62512 B1. The invention relates to a system and method for deciphering and transposing a visual into a musical composition from an artistic image with several innovative levels. First of all, it is performed by a system possessed by Fotoskener (KSZ), processor (SF.VIZ) for decomposing graphic and structural elements of the image, processor (SF.VIZOMUS) for decoding and transposing visual information from the image into separate music information elements, music processor (SF.MUSE) with a music database that processes the received music information and prints all the tones in the midi channels, selects the appropriate instruments and delivers the notes of the entire musical composition. The invention finds direct application in the development of a new methodology from the science of art in the qualitative comparative analysis of works of art. Multi-layered musical composition as a newly discovered artistic medium from artistic image or digital image, reveals that within the image of visual composition there is time that is present permanently and has its own duration and which is revealed during the process of transposing visual to auditory. For the first time, people with special needs can auditory enjoy an artistic painting, and the wide economic application of the invention finds its role and application within the digital applications of the growing digital game industry.

It is an applicable invention that significantly contributes to the technological advancement of this field, the science of art and the quality of life of the human population, especially the blind.

The Mayor of Belgrade, Zoran Radojicic, expressed his satisfaction because he had the honor of participating in the awarding of the “Despot Stefan Lazarevic” award, which, as he reminded, declared Belgrade the capital city in 1405. – Despot Stefan Lazarevic was the most statesman after Saint Sava contributed to Serbia being a “bridge” between east and west, and even today we see how important and difficult it is. In his time, Belgrade was transformed from a ruined, border town into a modern European capital, expanded almost ten times. He strengthened the economy, but he cared no less about art, culture and education. He gathered around him the most important statesmen, knights and winners, but also the best scientists, writers and painters. That is why we award the prize with his name to the most prominent creators and born winners – the mayor pointed out.

He told the award winners that it is important to know that Belgrade appreciates their work, and that what each of the winners in their field has done is worthy of respect and admiration. – You teach us how we can best contribute to the progress of our city. Along with your name, Belgrade is pronounced everywhere in the world with respect, thank you for that as well – said Radojicic.
I want this award to have continuity, said Radojicic, and added that it means that in this way we will continue to repay our best fellow citizens. – Such manifestations are a good opportunity for our children to get to know and recognize true values ​​better. I am convinced that the awards will be an additional motive, encouragement and inspiration for everyone. The slogan of this year’s Belgrade Day is “Belgrade with love” and only in that way, with love, can Belgrade continue its progress and preserve the values ​​for which it is known – Radojicic concluded.

The President of the Assembly of the City of Belgrade, Nikola Nikodijević, stated on this occasion that of the numerous manifestations that are held in the capital, the most beautiful and most important is the Days of Belgrade.

– The Days of Belgrade, which we celebrate from April 16 to 19, mark two exceptional dates in the history of our capital, and we are trying to celebrate the entire history of Belgrade then. Our history is rich in important events that happened in our capital. This is an opportunity to remind ourselves of the huge number of exceptional individuals who lived and worked in Belgrade, and whose works and achievements famously spread the name of Belgrade throughout the world – said Nikodijevic.

He specified that the crown of every event is the awarding of the best.

– The awards we share are also thanks to your city to individuals and associations that have done something great in the previous year for their city. Belgrade is an open, humane and noble city thanks to the people who live and create in it. I believe that you have done a lot with your work and activities in your fields, regardless of whether it is science, sports, history, culture or art. More important than anything is that you encouraged us with your example to be better and to do something great for our city that will remain after us. I wish you success in your careers, and I wish our Belgrade to further develop and be a better city for the life of all citizens – said Nikodijevic and thanked the members of the commission. On behalf of the laureates, Vladimir D. Janković addressed the audience, who pointed out that all of them were honored to receive this recognition, which bears the name of our city and the great Serbian medieval ruler Despot Stefan Lazarević, who built the part of this today’s metropolis of which no human endeavor has any meaning or purpose or goal – love.

– We are all honored and touched by this prestigious recognition, which sums up not only respect for creators from various fields of social life, but also the precious knowledge needed by every human being to be accepted in the environment in which he was born or lives. and valued, appreciated and respected – said Janković, thanking all the members of the jury who accepted the not easy task of choosing among the many artists who breathe in Belgrade and for Belgrade those whose works deserve to be crowned with this prestigious award with a long tradition and deep meaning .

The award for literature and translation was given to Vladimir D. Janković, for theatrical work Nada Šargin, for art and applied creativity, visual and extended media Aleksandar Cvetković, for music and music and stage creation Dr. Maja Smiljanić Radić, for social sciences and humanities prof. . dr Radoš Ljušić, for natural and technical sciences prof. dr Dragan Milićev, for the invention of Aleksandar Marković, for an exceptional work that represents a contribution to the development of medicine prof. dr Dragan Masulovic, prof. dr Ruža Stević, prof. dr Zorica Milošević and prof. dr Dragan Sagić, for the work or results of exceptional value of an individual to whom he gave a significant contribution to the development and improvement of medicine Kovid Hospital Batajnica University Clinical Center of Serbia, with prof. Dr. Tatjana Adžić Vukičević at the helm, while the award for architecture and urbanism went to Vladimir Lojanica.

Guests at this year’s City of Belgrade Award were representatives of the Association of Descendants of Serbian Warriors 1912-1920 and five cities and municipalities (Uzice, Smederevo, Sabac, Ljubovija and Kladovo), which was officially hosted by Belgrade City Assembly President Nikola Nikodijevic.